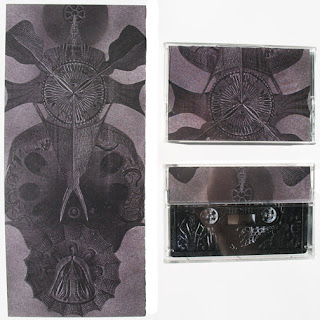 Q: the two tapes i'm listening to a lot are the hondo's mobius stripsearch and galena's through veils. both are stunning! can we talk a little about the creative process behind these two? 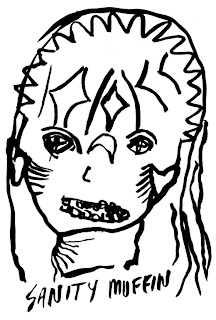 A: i can mostly only talk about the Galena tape since i was behind it, these were outtakes from my collab album with Nadja released middle of last year. thicker on the distorted baritone guitar and a little bit more exp meets black metal than previous releases.... basically i fill tapes up on my 4-track and then begin the editing process from there, choosing parts that i think work the best and building upon them slowly...

Q: this music sounds really great on cassette, i guess my question is a bit of a chicken-and-egg type question. is the end format something you keep in mind as you work, or do you work towards your goal and it just happens to work great on tape or what, how does the format and the art relate to each other?

A: i have vague ideas of what i wanna do but alot of stuff is just experimenting until i lock into something i like alot, then i develop it further. .. i usually work in the NOW and dont try to hold some preconceived notion of how it should be at the end... makes more room for freedom and spontaneity this way... most of my recordings are done on high bias type 2 cassette tapes on a 4 track or reel to reels so the tape format as the end medium just makes sense. the artwork with all our releases is very important and alot of time goes into that as well...

Q: in the recording, are things printed initially to tape like we are getting in the end result, or is there a process that is used in this regard? is there more mixing or more processing in the later stages?

A: yes, lots of mixing and adjustments and some overdubs and mastering done before the end master is made...

Q: can you tell us about the types of gear you used on the galena tape?
A: mostly baritone guitar via distortion,slight delay and reverb. space echo on vocals tweaked in realtime. blast beat drums done on a floor tom. broken casios running through synth processors and Moog synth. some field recordings as well....

Q: what are some aesthetic references for your work? some previous musics that inspired you?
A: i listen to way too much music to be able to pigeon hole any one group but at the time of this tape i was deep into the French black metal artist Moevot and well and Oregon's Velvet Cacoon and also the band Yoga.

Q:what city are you in? how does the local scene there relate to what you are up to?
A: i live in Oakland, Ca. there's alot of dark spaces to play in here and lots of metal and experimental, drone, dark ambient and the like... it's pretty thriving yet still underground.

Q: is there anything else you could tell us about how this wonderful music gets made? to me it sounds like post-everything.
A: we're just going for it really, sometimes mushrooms are involved in the process. my buddy Scott Caligure has been assisting with synth and other processing on all my newer work, as well as a couple tracks on this tape. so there will be more outside influence than before but its really helping things stay fresh. i still make most the final edits and mixing but having another head and pair of hands has really sent things to places i would not have gone on my own... like all collaborative work... plus he's a huge asset playing live.

Q: perhaps you'd care to comment on this. a few years ago as i was preparing for composing a record of mine, i dug in and was looking for the most interesting under-the-radar stuff to study. practically all of the really cool interesting stuff i found was coming out on these little tape labels, on cassette only, in limited numbers. can you comment on that?
A: i feel like it could have something to do with cassettes being more free and loose and fun thus containing alot of great energy you would not get from more "serious" and "over thought" recording and writting practices... alot of cassette releases are on the fly and raw and real and less self-inhibited i think than the "properly groomed" studio albums that are everywhere... just a thought))))

Q: thank you so much, for what you are up to. you make the world a better place with your art.
A: thanks so much, i really appreciate that)))
-billy 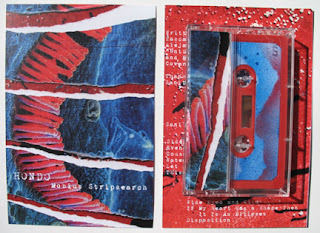