rebirth of a jam box 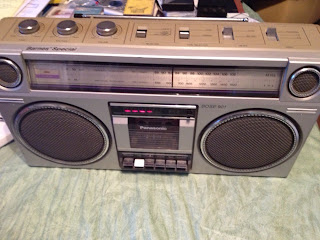 this is a panasonic rx-5025. i bought it off escam for about 40 bucks plus shipping.
so it showed up here for about 60 bucks. i've been jamming on it for a couple of years. radio worked great, tape player worked okay, although when i first got it, one stereo side didn't work. on one of the jambox forums a guy told me about hosing down the 1/4" headphone output with the proper spray, and that brought it back to life in that regard. however there was some internal cleaning stuff that needed to happen and also the belts needed to be redone, the counter didn't work and the transport was just a little draggy. i still carried it around and used it however.
since i have quite a few jamboxes, i dropped this one off with my friend mike that runs protek in port townsend wa. he got kind of excited about the unit, and dove in. he ended up doing a near complete rebuild. i guess the only thing he didn't really hit were the capacitors. both belts were replaced so now the transport is perfect. and the counter works, which is really handy. he cleaned it really good so now it records beautifully. and all the switches are smooth and noise-free. he installed upgraded crossovers, new tweeters {actual speakers rather than the piezo ones}, and the speakers out of a pair of bose 901's for the woofers.
the results are that it's better than new. it's really loud and sounds killer. i'm jamming to it right now as i type this.
this model type of panny is a really great bang for the buck box, one of my favorites. if you ever see one of these laying around, snag it with all due haste. size/power/sound/features are all in great proportion. they made millions of them, so you can find them. i just recorded a tape straight into it, on an inexpensive blank i got at a thrift store in belton texas for 25 cents. and it sounds massive. metal sounds sooo good burned really hot onto a high bias tape.