mark rubin on cassettes and music and life.

if anyone was ever into music, my good friend mark rubin was/is really into music.  here he writes:

If the truth be told, cassettes are how I got here. I can remember quite vividly when it started and why too.

In fact I had a very active relationship with music already having been raised by two amateur musicians who filled the house with radios and record players and even a “Happy Days” era jukebox that played 78’s. I loved the big LP’s and the large pieces of furniture that played them. For my 11th birthday I got two items for my birthday, a camera and a radio. I was so thrilled with the latter that the very first picture I took was of the former. I took it everywhere with me, oft infuriating my parents. I reveled in the idea of taking music with me everywhere I went.

barnyard electronics is available on cassette 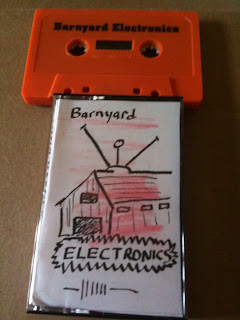 this is my effort for musically pushing the banjo forward. i never felt like the concept of using  jazz fusion aesthetics as a basis for new music, counted as a new idea. my feeling was that a more futurist manifesto type of ideology would be more apropros. i don't think soloing in straight un-swung 1/16th notes in an ionian or dorian mode, really qualifies as a new idea. so within this work, my goal was to destroy that. and use the banjo in a truly contemporary way.
here is a link to the futurist music manifesto: article
such a work would incorporate noise, spoken word, loops, cut and paste, glitch, and computer processing.
i hand drew the cover and color them on my kitchen table.

so i met the ramones when i was a kid

i grew up in belton texas, just north of austin. and in the seventies, music was a big deal, you could see lots of shows in austin. lots of the stuff i was interested in like punk rock, reggae, blues. anything different and not mainstream i guess.
so a crew of us went down there to see the ramones play {1978, i was 16}, in a white senco nail gun van. we had a keg of beer inside the car. so someone in our crew wormed their way backstage at the armadillo and discerned where the band was staying. at a la quinta inn up on i-35. so after the show, we drove over there. and there they were, hanging around. at first they looked at us suspiciously. we roll up slow in this van. but they figured out we had that keg of beer in there (it was after hours) and suddenly, we were whisked inside. so we found ourselves in there drinking and hanging with those guys. mark bell had just joined but i think it was before road to ruin came out.
joey had this battered old yamaha acoustic, that didn't have all the strings on it and he had it tuned to an open chord so he could just play with one finger and he sang some of the ballads that later came out on road to ruin.
but the coolest part was, he had this old jambox with him {i don't recall the model, but it was a one piece, single deck unit}, and the ubiquitous cardboard box with lots of lovingly made mixtapes inside. i believe he had hand drawn the covers, which is what folks used to do back then. but it was kinda cool cuz back then that's how we dug music was on jamboxes and mixtapes. it was cool to see these hep guys from nyc doing the same thing. i remember he had lots of trex. and being a trex fan myself, we chatted about that for a while. {that record tanx, helped me survive my childhood.}
we also discussed david bowie, and slade. it was pretty cool. and he had that deck, and he could carry it everywhere and jam. what i liked about him, was that he was a fan. and as a fan myself, we could relate on some level. {strangely, you can meet lots and lots of people in "music" that don't seem to really care for music that much.}
i recently was given that book the boombox project by a friend of mine, and was reminded of this story. the way those guys back then juked was on a jambox with lovingly made mixtapes. as i write this, there's about 30 cassettes on my kitchen table.