rebirth of a teac A 650 home stereo cassette deck 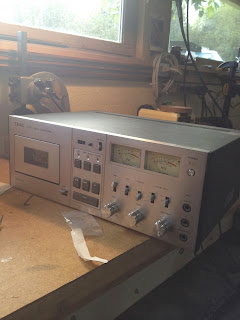 so i found one of these on ebay. i think i paid about 20 bucks for it. the shipping was pretty high, it's massive. like a lead brick! anyhoo, the seller says it powers up and works. which was only partially true. it would sort of work, but the belt was way stretched and worn.

so that made the odds pretty good. the right side VU meter bulb was out, i just left it. also the counter belt needed replacement but that would end up requiring much more surgery than i was ready to do. me and my friend james took it apart at his place, he has a nice bench with lots of light and plenty of tools. we got the main drive belt replaced and it works perfectly now. speed is perfect. counter still doesn't work which is not a huge deal to me, and the little bulb in the right VU, which is not huge either. so i just left those alone.
killer switches and knobs. big VU meters. good sound. soft touch controls which aren't really my fave, they are okay when they work but if they go out, it can be a bit of a mess. i kind of prefer the mechanical-rube-goldberg-lever type….that way it seems like i have better control over editing, but that could just be me. i feel like i'm yelling down the hall for someone else to pause the unit, with soft touch, but i guess i also learned with the mechanical ones so that could just be a matter of perception.
there are piles and piles of these types of badass machines all over the place. typically with a new belt and cleaning they are ready to go! give it a try! smart thing would be to check to see if you could get the manual and belt kit FIRST…THEN consider buying the unit. they make universal kits…but i don't know. it's nice if it's a perfect fit.
at 9:02 AM