the measure of mystery by daniel higgs 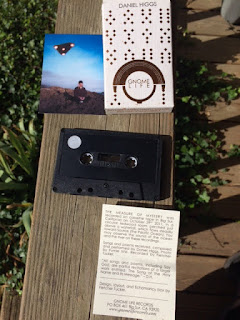 this is one of the coolest things i've heard in a long time.

i love when i get my hands on something like this. the whole package is really nice. i'm unfamiliar with mr. higgs, however two of the...shall we say components of this work, i have spent a fair amount of time studying, one would be the banjo itself and the other would be the bible. and to hear his take on all this is pretty amazing. it's recorded in a fairly low tech way, which suits the material really well. his banjo playing is really different and he treats it more like...an eastern kinda thing. like he's conjuring up spirits or speaking to the Creator or expressing himself in some pre-verbal way. kind of like an animal sound. he sings sometimes with the banjo, like in the old blues way where the voice follows the instrument or vice-versa or however you'd say that. the message on the tape is really developed, and is highlighted by the tape itself. the physical packaging of the tape is really nice and different too and really homey feeling. i love stuff like this. though that's not really correct, i'm not sure there is a "like this" but you know what i mean. by this i mean out of the blue and different. i can't identify the ..poetic content, if it's rosicrucian, sufi, or bahai, john milton, or what. but it's very interesting and a really good listen.
at 11:42 AM