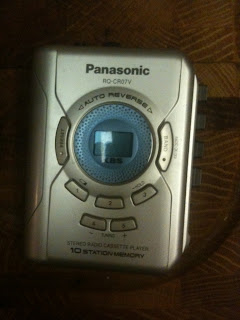 bought this for ten bucks plus shipping on ebay.  it's brand new and works perfectly.  with a good set of headphones, juke shall abound.  old school hip hop, metal and punk rock really sound killer on here.  especially with homemade mix tapes on a good blank and you smear the levels on there.   i did an experiment where i burned some mp3's really hot onto a good cassette and it was badass.  that's definitely the trick for making downloaded songs rock.  not as hep as vinyl to tape, but surely better than an ipod.  there is a bass extender switch on the unit which is pretty hep.  ten bucks.  i never use the radio feature.  it has auto reverse but i'm not a big fan of that because i like to pop the tape out, flip it over and close the door.  but i can live with it.  the thing about auto reverse, as well as the impetus in the current age to arrange the program linearly,  i don't like hearing albums or cds or whatever straight through. i like the way a side A and a side B work out.  you get the program in two chunks.  which is more flattering to the music to me.  if all the dramatic plays in the world were suddenly run straight through with no break, it would change everything.  they have Act 1 and Act 2 for a reason.  did you ever notice how you'll be over at someone's house and they'll put a cd on and about the fourth song in they'll start talking and forget what's playing and then go over there and turn it down?  more likely the middle of the first song.  i can't really dig music like that.  when i was a kid my father would play records and you had to sit on the couch and stare at the record player like you were watching tv and you couldn't talk.  which is why i feel comfortable in a studio.  staring at speakers.  that's why i like 45's too.  i like to play one song over and over all day.
i couldn't believe i got this thing for a ten spot.  it's brand new.
at 7:17 AM