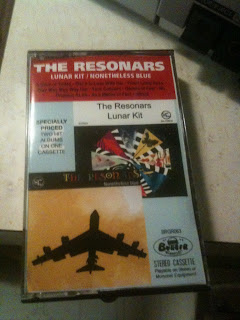 burger records is doing great stuff.  it's really exciting to find a label that you can buy things blind from, and the transaction works out great.  i think this business model is a good one.  it seems that sometimes record labels will put out so much stuff in quantity, i guess in hopes that something will stick, that the overall quality ratio goes way down.  and if every entity does that, we have too much crap to sort through and brand identity is lost.  if cds cost 20 bucks, in a cash strapped world, who is going to gamble on that?  they'll just buy things they already know, or steal it.  what's so difficult about that concept?
but burger records is nailing it.  companies like this make the world a better place.  win/win is the best social model.
i bought this one blind off their site.  i think with shipping it was seven bucks.  it's been in the player for going on the second day.  i like to spin just one tape for several days.  two records on one tape, we get here. the playing, songs, arrangements, overall vibe are really great on this.  fans of like, and i'm terrible with those catch-word things, garage pop or whatever are going to love this.  there's a kind of a small faces/jam vibe going on.  it's all very well rendered.  it works great on cassette.  i'm very happy with this purchase and would recommend it.
the only place they kinda lost me, and this may just be that i was alive the first time that came around, are the kinda overt beatles references.  they do their own take of it and it's cool, it's just that's not my fave stuff.  i love that band, but kinda quoting them for some reason makes me wince just a little.  in my view it's a little like quoting bob marley or bob dylan {quoting in a sonic way}, those guys are such a fabric of our landscape, we can just go listen to that, if it isn't already permanently wedged in the cortex already.   but that said, the resonars have plenty of other stuff going on,  forgive me for the slight offhand comment.
jangly guitar riffs aplenty.  there are moments of kind of  an early stooges thing, the pre-punk punk rock and all that stuff, that to me is the badass part of this tape.  there's a couple like mc5 jams on here that kick some major ass.  good singing.
overall they have a cool sound, set of references, and great songs.  the recording oeuvre fits tape very well.  it sounds great to smoke it on a jam box pretty good.  especially a mid-size one, cranked up till the bass breaks up just a little.  i was having a weird day the other day, blasted this and felt better.  it's like safe dope.
at 5:25 AM